Lessons in THRIVE-Ability from the French countryside 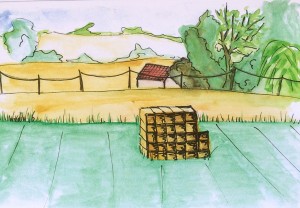 The theme of sustainability continues to show up in interesting ways. A few weeks ago it was the word itself (sustain-ability) that triggered a reflection. It seemed odd that we would want to “sustain” an economic and social environment when the status quo is proving to be increasingly unsustainable (political systems breaking down, rising inequality, never ending wars and all-time low levels of employee engagement).

What if rather than reinforcing the systems and institutions that aren’t working anymore, we are being invited to discover new ways of Being and Doing that will bring about a completely new paradigm – one where each individual’s unique human potential is expressed, appreciated and fully harnessed?

Could it be that in the organizations of the future we will talk about THRIVE or SHINE-Ability rather than SUSTAIN-Ability? Could it be that this new ABILITY has the power to transform and lift up others along the way?

Nestled deep in the French countryside, together with several other families, we got a glimpse of this new way of Being and Doing. Our little holiday was not about relaxing or refreshing in order to SUSTAIN ourselves (back in the real world). Rather it was about being in service to each other, sharing our gifts, showing appreciation, and being silly and playful. In the process each one of us had the opportunity to SHINE and THRIVE.

Upon reflection a couple of lessons stand out that not only made this experience so memorable but also offer clues on how to transition from the SUSTAIN-Ability paradigm to THRIVE-Ability. 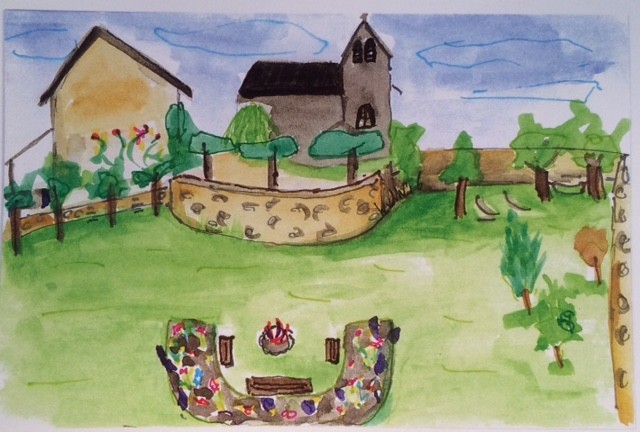 Our host fell ill a couple of days before our arrival. Most people, including myself, would probably cancel and reschedule the event (especially when it is a group of 15 of which 7 are children). This option however did not cross her mind. Instead she saw it as an opportunity to take a step back from her familiar “hosting” role and simply invite everyone to take care of themselves and each other. This is the email I received from her prior to my arrival:

“I had 40 degrees fever, now slowly starting to recover. I have set the intention that everyone is serving each other. Let us all SHINE”.

Letting go in this way takes a tremendous amount of trust in each person’s ability, and willingness, to take on more responsibilities. Rather than being a burden we noticed that this “letting go” was in fact empowering all of us to SHINE. It gave us the opportunity to step in and contribute in areas that we feel passionate about and play to our strengths. Some of us showcased our cooking talents, while others felt more comfortable organizing and cleaning up. We helped with some of the building projects around the house, provided musical entertainment, created pieces of art and even planned a surprise birthday party.

The remarkable thing was how organically everything unfolded. There was no need for extensive planning and agreements on who does what to ensure nothing falls through the cracks. We simply knew what needed to be done and it was always a pleasure to do it.  We put the collective interest ahead of our own and in doing so there was a deep sense of fulfillment and meaning that came with each of the tasks. 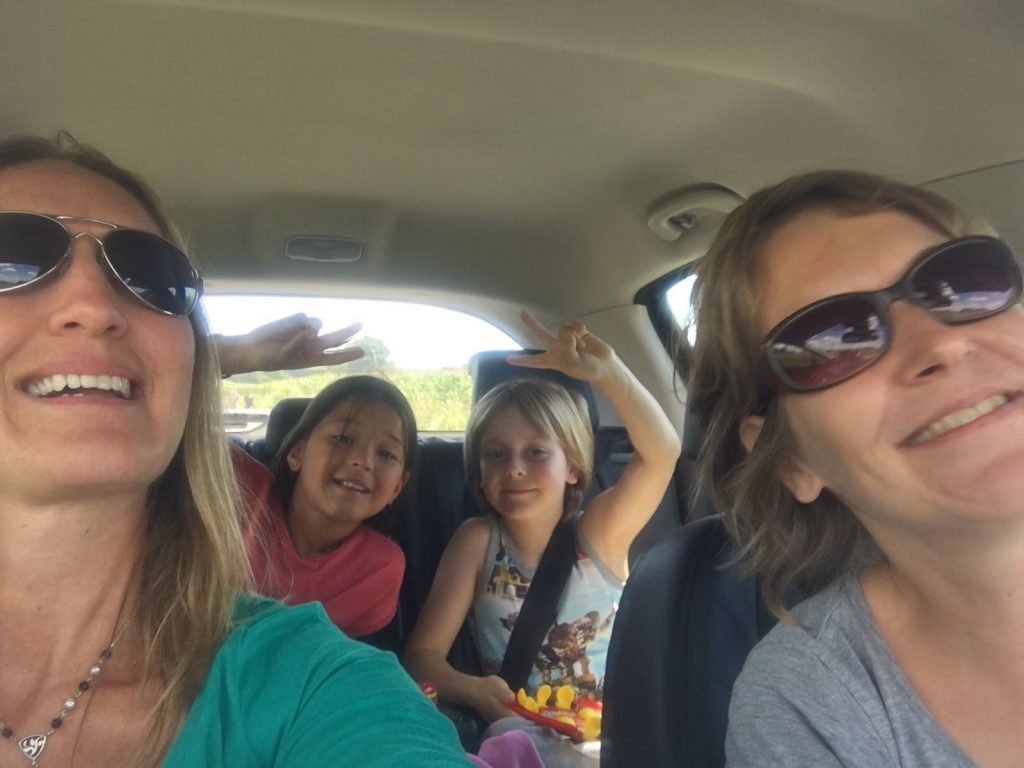 The best holidays are the ones where we can do what our heart longs for. Reading a book, long walks in the countryside, afternoon naps, jumping on the trampoline, playing games, working in the garden and even mystical sessions in the neighboring chapel were all possible. There was no program, no agenda, simply a natural flow to whatever we were called to and a deep respect for each other’s choices.

This open space, free of expectations, had a curious effect on me. At first it felt somewhat disorienting. I would have something in mind that I wanted to do (like pick plums from the tree) and then on the way there I would get distracted. Somebody would show up and the next thing I know I’m engrossed in a fascinating conversation. Then a little bit further I’d be invited to play a game of badminton with the kids. The plums would simply have to hang on for another day.

This state of “roaming” was slightly uncomfortable. It felt as if nothing really got done, at least not the things I was intending to get done. On the other hand, it was amazing because the day filled up with little surprises and inspiring encounters. As I surrendered into this state of “roaming” I noticed how full our lives are of adventures and experiences waiting to happen. They are there in front of us but our daily schedules and routines often prevent us from seeing and engaging with them.

I now see a clear connection between our ability to engage with what’s in front of us (vs what we set out to achieve) and accessing inspiration for new ideas. “Roaming” will become a bigger part of my daily practice! 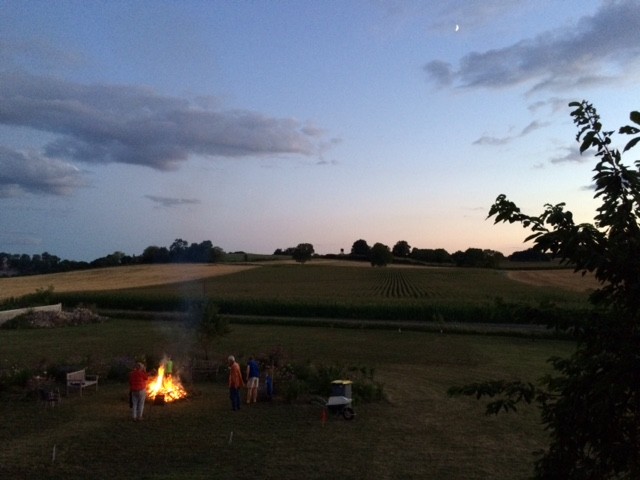 3. Kids as our greatest teachers

The idea of coming together with our kids seemed like a great one. The kids (all similar in age) could play together and the adults would have some quality time to philosophize and ponder the BIG questions in life. At least that was my reasoning prior to arriving at the event.

What actually unfolded was something very different. Quickly we realized that there was no boundary between the kid’s world and our world. In fact we soon discovered that the kids would become our greatest teachers over the next couple of days. They were the perfect role models for surrendering into the NOW (or what I now refer to as roaming).

They are powerful observers of the idiosyncrasies of adult behavior and won’t hesitate to innocently ask the awkward questions around the dinner table. For example:

These simply interventions turned out to be significantly more impactful in triggering our growth than any other kind of personal development work.

Most importantly it opened the door into their world of PLAY. We learned the art of making short music videos, experienced the benefit of dancing while baking a cake and in the process we reconnected with our own playfulness, silliness and lightness that bring incredible joy into life.

We were also witness to the incredible ease with which they transcended differences in language, gender and age. A simple ball throwing game, proposed by one of the parents, was all it took to kick off the powerful bond that developed among these 7 kids over the next couple of days.  I find it interesting that as a child it is totally normal to be engaged in an activity with another child (like jumping on the trampoline) simply because you enjoy each other’s company and both like jumping. It’s not important to first know the names, or where we come from and what we do. As adults we are more consumed by these “superficialities” and use them to determine who to engage with and when. Children, on the other hand, simply rely on their intuition, they sense into the connection, and when it feels right, they can hang out for hours without  having to speak a single word. 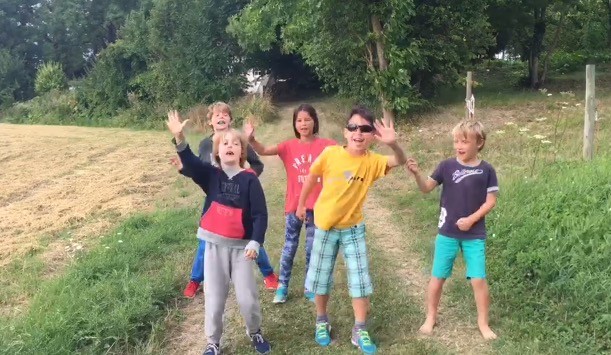 In closing, I would like to thank our incredible hosts for such a warm welcome into their home, and creating the optimal conditions for us to experience “heaven on earth”. The lessons from these days are now deeply anchored in our Being and will serve as powerful inspiration as we continue to shine this light in all the different aspects of our life.

For those of you who are intrigued and ready to experience life through the lens of THRIVE-Ability we invite you to join us at the Summit for Human Potential realization in the Netherlands from Sept 19th to 21st. More information available here. You can also learn more about the work we do to promote greater levels of Human Potential Realization for individuals and within organizations: www.beingatfullpotential.com