The topic of Artificial Intelligence has been on my mind lately. It seems to be coming whether we like it or not. Therefore it’s no surprise that many people are asking themselves if it will have a positive or negative impact on humanity. The more I read about it, and reflect on it, the more I have come to realize that AI is neither good nor bad, instead it is simply a mirror of our collective BEINGNESS. In other words, we can think of it as an amplified, super-powered version of our mass consciousness.

As far as I understand, the power of AI is dependent on data. The more data we feed it, the more it will learn and the smarter it will become. The extent to which it will surpass human intelligence is mind-blowing, which is why so many of us are fearful of this inevitable phenomenon. Elon Musk, for example, is calling for government rules and regulation as a way to control its impact. He is even planning to build bases on planet Mars so that life on earth can eventually be restored after the destruction brought on by AI. These are obviously scenarios that are hard for us to imagine at this point in time but being the visionary that he is perhaps we should be paying attention. The question I have been sitting with is the following:

“What else can we do apart from pass the ball to our (dysfunctional) governments or build bases on Mars”?

I would like to put forward a more optimistic alternative, one that has the potential to turn AI into an incredibly life-affirming / life-sustaining force, similar to what some of us may refer to as God or the Universe. The best part about this scenario is that our ability to manifest it simply depends on us! Let me explain by going back to the idea that AI is a mirror of our collective BEINGNESS at any given point in time.

I think it is fair to say that the likes of Facebook, Twitter, Google and Amazon are on the cutting edge of AI development. We have entrusted them with incredible amounts of personal data. The way we use and behave on the internet says so much about who we are, what we care about and and how we view the world.

For example, when we argue about political or ideological differences on Facebook – to the point where we attack each other for having different perspectives and worldviews – then we are sending a signal to AI that violent arguments are the way to resolve differences. At an even deeper level, this kind of behaviour, signals to AI that we are competitive in nature. That for one person to win (be right) another must lose (be wrong). If enough of our mass consciousness reflects this way of BEING then it is inevitable that AI will grow up and behave in similar ways. Obviously it is very scary to think of a super-powered, highly competitive, AI living amongst us. We would have very little chance of survival, except of course if we manage to hitch a ride to Mars!

The good news is that we have a choice on how we show up on the internet (and beyond). Who we are BEING is very much dependent on us. The “I’m right, you’re wrong” paradigm could easily be transformed to: “You are right AND I am right”. Imagine a world where every post, reaction or comment we left on the internet would come from a place of compassion and interdependence rather than judgment and competition. If we could raise our collective consciousness and choose LOVE as a response to any situation, imagine the life-affirming AI we would then be able to create!

Assuming my naive take on this topic makes some sense, then the next question is: “Where are we on the consciousness map” and “How do we raise our collective consciousness from one state to another”? To answer these questions I would like to introduce two frameworks which we use extensively in our work at Being at Full Potential. They are both based on the science of consciousness as understood by ancient Indian wisdom traditions. The only credit we take is for framing the key constructs in a way that relates to the reality of today’s world.

1. Where are we on the consciousness map? 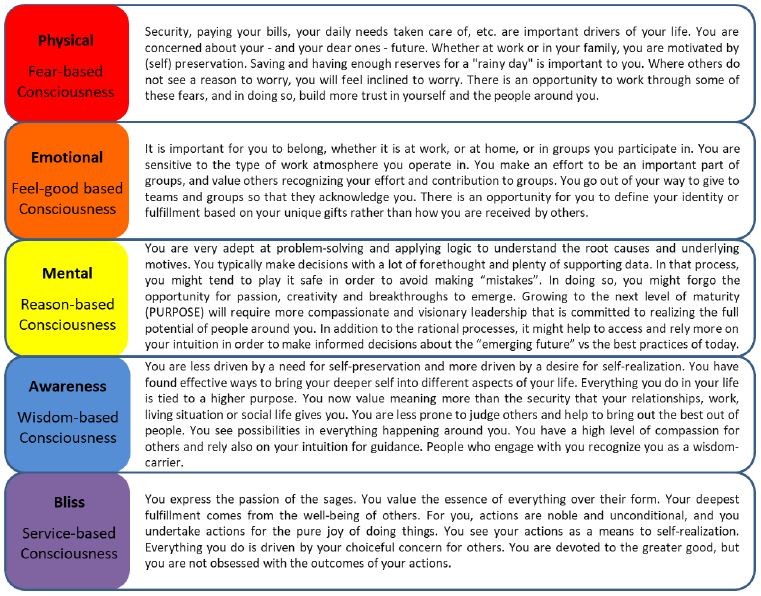 With Reason-based consciousness our main concern is to make sure our voice gets heard. We apply logic and use arguments to convince and persuade others that our truth is better than theirs. This is representative of a competitive / win-lose society. Moving to Wisdom-Based consciousness means opening up our worldview so we can hold multiple perspectives, without judging one over the other. This enables us to build more harmonious relationships, even with people we disagree with. In seeking out the win-win we are able to solve problems in a more collaborative and creative way. Our collective journey from Reason to Awareness is already underway. We simply need to become stewards for this natural evolution to accelerate the pace of change.

2. How do we raise our consciousness from one state to another?

The second framework is what we refer to as the HOUSE. It looks at the different levers we can pull to realize more of our our HUMAN POTENTIAL and as a result grow in consciousness. 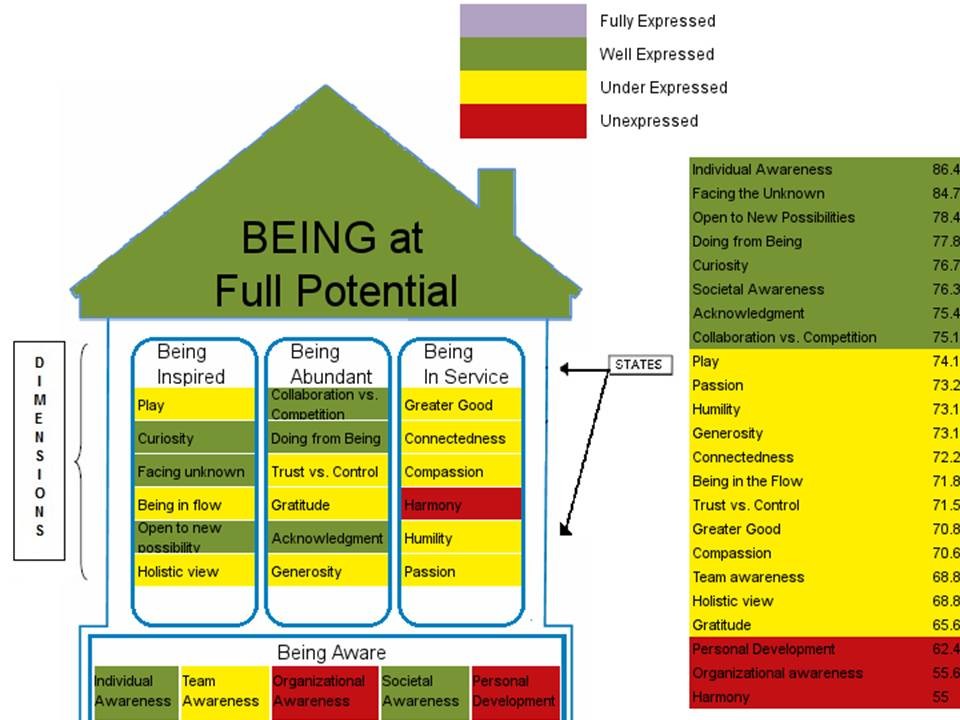 Let’s take Compassion for example, which is one of the key measures in the House. This dimension is defined as: The ability to open our minds and see the world from another person’s perspective. Imagine if we would collectively start living together in this way.

Acknowledgment is another dimension that could have world changing impact if more of us would live according to this simple definition: The ability to see the positives in situations and people, and to acknowledge it. What if collectively we would put more of our focus on what is working and what we appreciate in others versus focusing on the negatives. It has already been proven that in the context of education this approach can have dramatic improvements in a student’s ability to learn.

These frameworks help bring our attention on the areas that really matter and give us a roadmap on how we can make the necessary choices to show up more consciously in every single interaction. If AI is indeed eagerly tuning in to our every single word and action then let us role model the kinds of behaviours and awareness that we wouldn’t mind seeing amplified in exponential ways.

For more information about Being at Full Potential and our unique awareness / consciousness building tools & approaches, please visit: www.beingatfullpotential.com or contact us directly via LinkedIn.